Women love jewelry and find it more beautiful than any other stuff in this world. There are several varieties of jewelry like rings, earrings, and necklaces. But there is a piece of jewelry that is often underrated. Yeas we are talking about mang Tikka. Mang Tikka is essential jewelry for any married woman or bride because it completes their solah shringar. Solah Shringar is perfectly depicted in the pictures of a goddess or for a more clear picture just look at the bride. This age-old jewelry is in our tradition for a very long time. 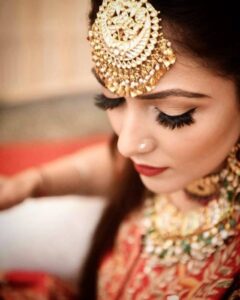 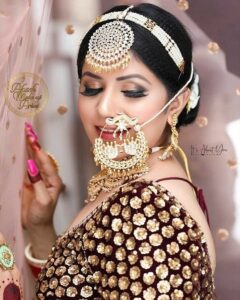 A maang tikka is a hair accessory that has a chain with a hook and a pendant attached to it. It falls in the center of the forehead and creates a beautiful look. The pendant of maang tikka comes in different shapes, sizes, gemstones, materials,  and designs.  It gives a very royal vibe when worn with a traditional outfit. We can generally see the brides wearing mang Tikka on their wedding day. The maang tikka is studded with either diamonds or pearls. 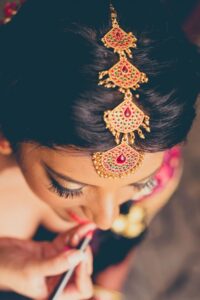 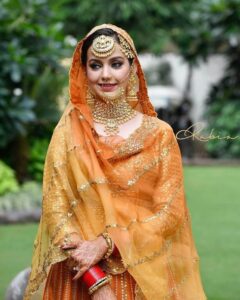 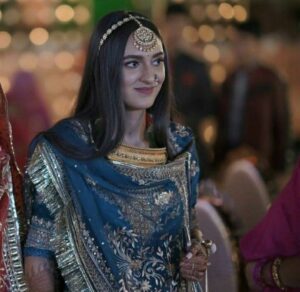 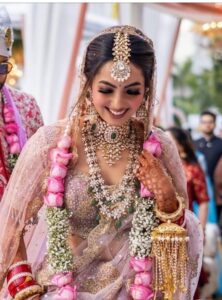 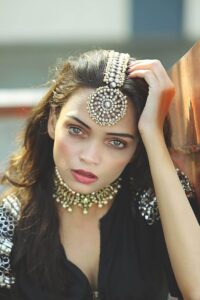 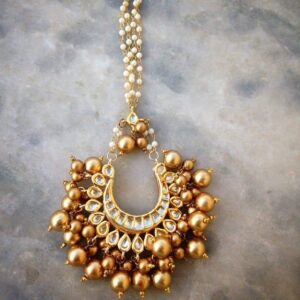 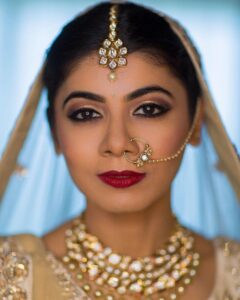 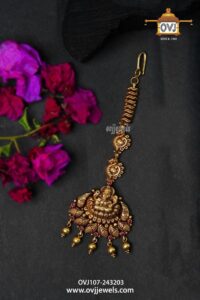 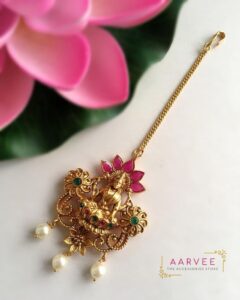 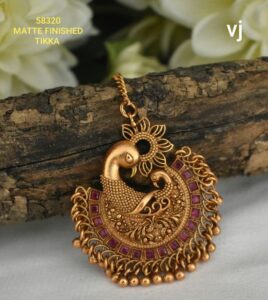 Maang tikkas are called Borland or rakhdi in Rajasthan which is the most famous maang tikkas in India. It looks like a ‘bell’. It gives a pure royal look to women. You can definitely choose this style of Maang Tikka if you want to carry a Rajputi or Rajasthani look. 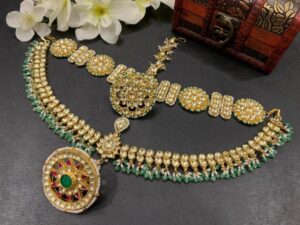 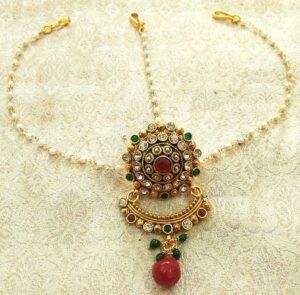 This mang Tikka has an eclectic assembly of patterns and textures amped with carefully chosen rich ritualistic colors. You can definitely choose this for your wedding day. 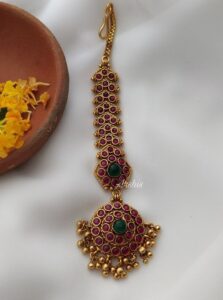 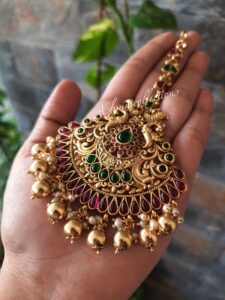 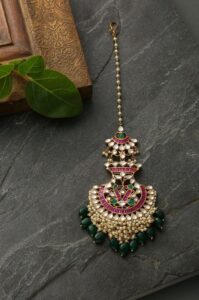 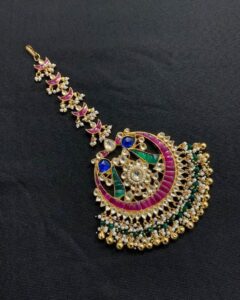 Our love for experimental brides is infinite. We are all eyes on these gorgeous Sikh brides who ditched adorning their heads with a passa and instead picked an OTT maang tikka design to complete their bridal look. 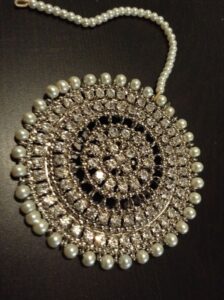 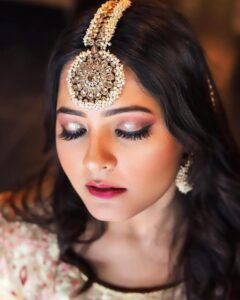 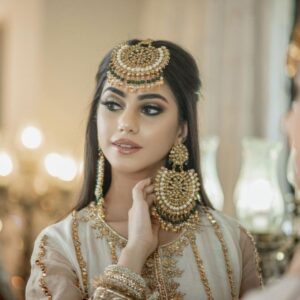 Also known as a jhumar or a side tikka, the Mughal era originated passes are almost every kinda bride’s favorite. While on their wedding jewelry shopping spree, brides are going gaga over passas along with major jewelry pieces like earrings, naths, neckpieces, choodas & kaleeras. With so many designs & styles available in kundan, polki, pearl, gold & diamonds, passas have made it to every style book as a statement jewelry piece, and rightly so! 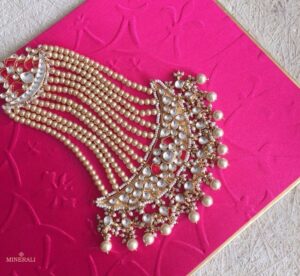 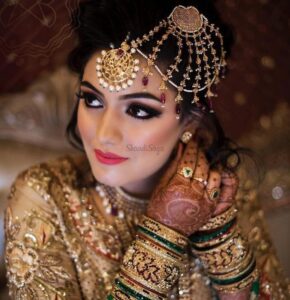 What are types of Maang tikka?

What is side Maang tikka called?

It is called "choti" of 'tikka'. The story behind this name is that a sardar ji gave this name to it because he lost his balance and fell down with tikka crashing on his temple. Sardar ji was a jolly man and used to love to laugh and make people laugh too. He was given a very important position in government. He had to travel between Delhi and Mumbai a lot. This traveling was tiring but Sardar ji never complained. People started to respect and like him. On one occasion when Sardar ji was traveling, he was very tired and took a nap but woke up to realize that the train had left the station. So he had to run along the railway track to catch up with the train. After a while he caught up with the train. He was sweating and tired. But he had an important meeting to attend. So he decided to freshen up by combing his hair and removing the tikka from his forehead. He took out his tikka from its case and placed it on the ventilator. He tried to fix the tikka in his hair with his hands. He was so tired and was drowsy that he was unable to balance himself on the ventilator. He lost his balance and fell down on his tikka. The tikka crashed on his temple and the blood started to flow.

What is maang tikka made of?

Maang Tikka is also known as Haldi Ka Tikka . It is a North Indian delicacy that is served as a topping on Bhindi Do Pyaza and for eating with chapati or paratha. The word maang means "turmeric" or "haldi" in Hindi, but it is made with the combination of 'turmeric', 'saffron' and 'red chili powder. This dish tastes really good. It can be made in both vegetarian and non-vegetarian way. 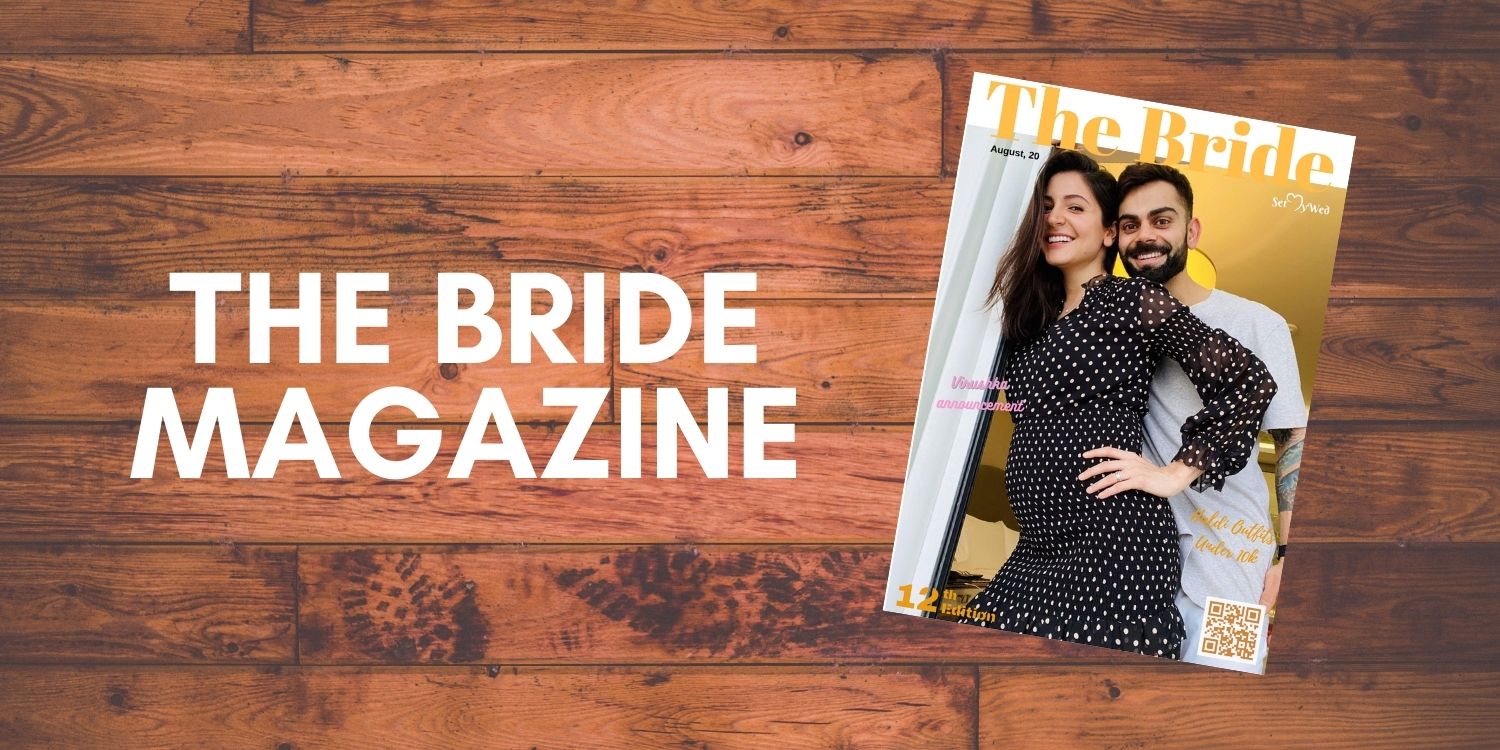 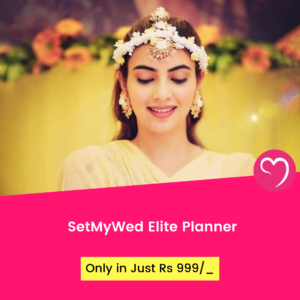 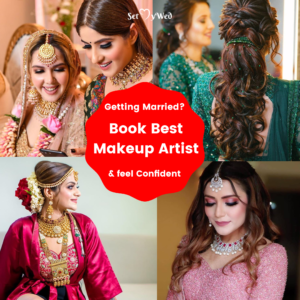 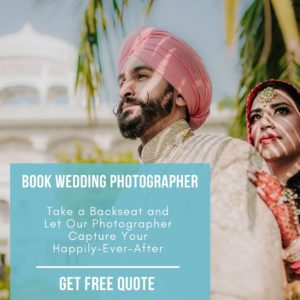 Where I can find the best wedding photographers and makeup artists?

SetMyWed provides you with one of the best photographers and makeup artists that too in your budget and preferred location.

How to boost up the photography business?

By registering into SetMyWed you can get good business in a very short span of time. You can have SEO and SMO in options if you are patient enough.

Where I can find the best wedding vendors?

Undoubtedly SetMyWed provides various choices of Wedding vendors that you can select accordingly.

Which wedding portal is the best for freelancers?

SetMyWed gives an amazing startup base for any freelancer whether it is about Photography, makeup, wedding planning, or any other services.

SetMyWed is India's best and trusted wedding planning portal that onboards limited but worthy vendors on it and millions of people can find out their suitable objectives here.

Which is the trending wedding portal in South India?

Undoubtedly SetMyWed is growing so fast and positively in the south Indian market where the top most south Indian vendors are being associated with the company.

SetMyWed is undoubtedly trustworthy. Thousands of wedding vendors have got and are getting amazing business from them.
And people are getting wedding services according to their pockets. And SetMyWed is India's fastest-growing wedding planning company.

How do I register on Setmywed?

Step 1 - Go to www.setmywed.com
Step 2 - click on the top right bar and click on the login
Step 3 - input all important information.
Step 4 - within minutes SetMyWed team will be in touch with you. and hence your work will get started.

How do wedding planners get leads?

Simply you can get registered on SetMyWed and you will get quality leads from over there.

How do photographers get more followers?

A long-term procedure of SEO can get you a decent amount of followers.
For quicker results, you can make your promotions done on SetMyWed. Simply use #SetMyWed or directly contact the team to get featured.

How do I start a wedding planning business?

Start with a clear definition of your business.
Focus on financials.
Work on your social media handles.
Get connected with trusted wedding planning portals like SetMyWed.They give quality leads to wedding planners.
Create unique and attractive wedding concepts.

How can I promote my wedding services?

You can promote any wedding-related content on SetMyWed if you want more engagement and reach for your content.

How many vendors are there on SetMyWed?

Probably in hundreds, SetMyWed offers limited but quality vendors. They believe in quality over quantity hence they do provide one of the best wedding vendors connected with them without any hassle.

Where I can find the best wedding venues?

SetMyWed provides to a good amount of options in the case of Wedding venues. According to your preferences, you can find wedding venues for your special day.

Does SetMyWed charge their clients?

Absolutely not, Anyone can find their best wedding vendors without any cost. even complete assistance is provided to the client so that there will not be any problem to the client.

How do I find wedding clients in India?

So many ways like networking, social media, referrals, testimonials, and so on but the best and the fastest way to get Indian clients is to get associated with trusted wedding portals like SetMyWed. They give you very quick and quality results. And you can get Indian clients in very good numbers.

How to find the best photographers in Delhi?